So easy everyone can do it: How we’re like cave men and ants

**Today, we have a guest post from graduate student, Emily Meineke — Enjoy!**

There was a time when people weren’t so connected. It was a big deal 500 years ago to cross the Atlantic, much less the Pacific. Nowadays you could be in Japan in less than 24 hours with a martini in your hand.

Recently, there have been a lot of new stories about humans being more connected than ever before, but maybe the coolest I’ve heard—I’m an entomologist, get ready—is that being more connected makes us more like ants. The way that we connect to one another through Facebook looks a lot like how ants connect to one another. Some ants are like the celebrities of Facebook, using their antennae to talk to many other ants, whereas most ants – like most of us – talk to relatively few. If you are a relative loner, in other words, you are not, evolutionarily speaking, alone.

Not only are some ant networks like human Facebook networks, Mandi Traud, a Ph.D. student in Biomathematics here at NC State, is asking in her new research if ant networks could be like caveman networks. Caveman networks work like this: If you were a Neanderthal, you would live in a cave with family members. Ideally, your cave would have everything you needed: food nearby, shelter, presumably some kick-ass drawings of buffalo, and you would not go to anyone else’s cave. . . unless, you know, you wanted to make a baby Neanderthal. Then you’d head out into the night singing, one supposes, your best Neanderthal Marvin Gaye.

So if you could go back in time and watch the caveman network from above, you’d see most Neanderthals staying in the caves they grew up in. Occasionally, some would move to other caves1, 2. Mandi thinks certain ants, particularly those that are friendly with ants of the same species living in different, but nearby hills, might sometimes go to those other anthills and talk to the ants there; but mostly they would stay with their sisters near the hills where they were born. If this caveman network model holds true, we’d expect the ants to move around exactly the same as Neanderthals, just on a smaller scale and singing different (more chemical) songs.

Mandi’s study is a cool example of how science begins. She pulled together separate facts about social animals to form an interesting question. And it turns out the first step to answering her question is where I came in — I helped her paint ants while she was working on display at the Nature Research Center in Raleigh. (Yes, the first step to seeing if ants are like cavemen is to paint their rear ends and watch them scuttle around under a black light. Let’s see you try that with a caveman). 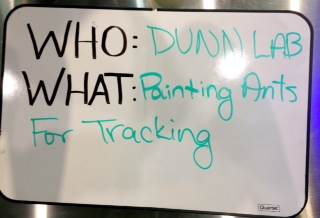 Letting NRC visitors know what we're up to in the lab. 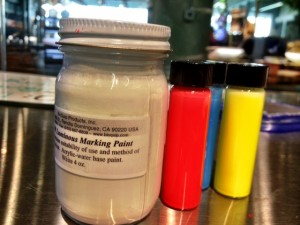 The paint we use to mark the ants for their debut under the blacklight.

Mandi uses computer software she is developing with another student Carl Giuffre to track the black-lit ants and record what ants are talking to one another. I’m eager to see if she finds that, once again, we, or in this case some of our ancestors, were or more like the insects than we ever thought or if there are key differences. If the ants are like cavemen, it opens doors for next steps. While it is hard to study how cavemen might respond to disease or changes in social structure, it is easy to do the experiment in ants, or easier anyway. It is harder than you think to paint a wiggling ant. 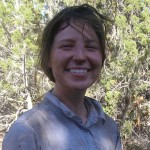 Emily Meineke is a graduate student working with Dr. Steve Frank and Dr. Rob Dunn on how human pressures change the insects that live around us, particularly herbivores that endanger trees. Currently she studies the effects of urban warming on scale insects, which eat plant juices and frequently kill trees. One of her favorite parts of being a student is sharing what she learns about insects with kids.