**Over the next few weeks, we’ll be posting dispatches and reflections from team members who are doing ecological research in urban areas. Today, we have an Intern Diary from our undergraduate intern, Christi Mileski, describing her experiences doing “field” work on the streets of Baltimore this summer.**

When I envision the perfect job, travel, learning experiences, and the great outdoors are always involved. This summer my job offered all of those opportunities.

I worked for two different research labs in the Biology and Entomology Departments at North Carolina State University. I spent time with the Dunn Lab, an ecology group with a number of citizen science projects, and the Frank Lab, who researches plant-insect interactions and pest management. 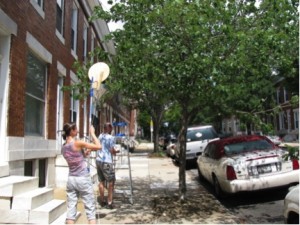 In mid-July I accompanied Elsa Youngsteadt, a post doc in the Frank Lab, on a research trip to a city the likes of which I have never previously experienced: Baltimore, MD.  And what an exciting and eye-opening trip it was!

Doing ecology in the city is an interesting experience. Most people think of ecological research as taking place in the woods, on farms, or in greenhouses. Yet, there are so many fascinating things going on with the plants and animals in big cities, too. And on top of that, doing ecological research in the city means you’re often working in public spaces – which often leads to interesting conversations and interactions with curious passers-by. It is a great opportunity to share our research and knowledge about organisms that most citizens don’t even know exist.

We had two missions to accomplish in the 12 days we spent in Baltimore this summer:

#1: To locate 32 red maple trees in 16 different sections of the city’s residential areas.In each area, we used “heat maps” generated from satellite data to locate street trees occupying cold and hot zones of the city. But what we were really interested in were the scale insects living on the tree. 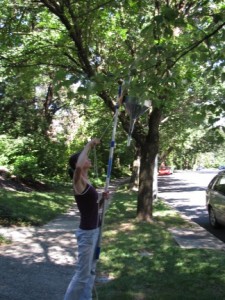 Dr. Elsa Youngsteadt using the funnel to smack insects from the canopy of the tree. (Photo: C. Mileski)

Now, for those who are not entomologists, scales are small insects that feed by sucking out a plant’s juices and are, therefore, viewed as serious agricultural and urban forest pests. They are found on nearly every type of plant or tree except for plant species located in the cold regions of the Arctic and Antarctic.

In the Frank Lab we are researching scale insect populations living on trees in rural and urban areas, and we are particularly interested in how cold zones and hot zones created by the urban landscape affect scale populations along the East Coast. This work might ultimately help urban planners lessen the impact of these pests in cities. Elsa and her team will be studying trees and taking samples from 4 cities: Raleigh, NC; Baltimore, MD; New York, NY; and Boston, MA.

To sample each tree, we would collect four twig clippings from each cardinal direction. We then used a clapper attached to a funnel to smack the insects off leaves on standing tree limbs. In the evenings and afternoons after we wrapped up the day’s fieldwork, we inspected each collected twig and 20 leaves picked from those twigs under microscopes to count all the living insects. The insects that we collected using the funnel and clapper were placed in a vial filled with ethanol; we took those back to the lab for later inspection and identification. 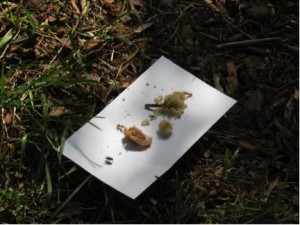 #2: Set ant baits at each red maple tree.We would set index cards on the ground and place bits of tuna and cookie crumbs as the bait. We would wait 18 minutes for the ants to find the bait, and spend the next 7 minutes using an aspirator (a special device for sucking up ants) and a paintbrush dipped in ethanol to collect all the ants attracted to the bait. We needed such a long period of waiting and observation before collection because sometimes the ants would not come to the bait quickly. There could be several reasons for this: the baits were often set under street trees largely surrounded by concrete, making it difficult for ants to locate the tasty treats. It was also possible that ant pesticides were applied around the area where we were sampling. 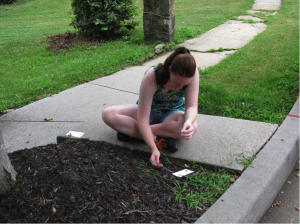 I'm using a paintbrush to carefully collect ants that have been attracted to the bait. (Photo: E. Youngsteadt)

Why were we interested in urban ants? Ants play important roles in the breakdown of organic matter in the environment (material like tree leaves, dead cicadas and animal poop), a process called decomposition. There are thousands of different species of ants around the globe, and yet the biodiversity of ants in urban areas has not been well studied. We (and the School of Ants citizen science project) hope to change that.

So what have we learned so far from this summer fieldwork in Baltimore?

After looking at what seems like every red maple tree in Charm City, we have declared the trees free of insects. Ok, this may be a slight over-exaggeration. We found very few scale insects on the trees we sampled. And surprisingly, even the ant baits didn’t consistently attract many ants (only about six species).

These preliminary results have left us all scratching our heads, particularly since work by another student in the Frank Lab, Emily Meineke, has shown that there is an abundance of scales in Raleigh. In fact, she found more scale on urban trees compared to rural trees near Raleigh, and more scales living on trees in hot zones compared to cold zones. Also, work by folks in the Dunn Lab, with help from School of Ants participants, have found at least 160 different species of ants in North Carolina, including many, many more species collected in urban areas than we found on the streets of Baltimore.

Elsa and her team are still processing the Baltimore samples, and they recently completed sampling in New York City and Boston. Although I won’t be continuing work in the lab this fall semester, I look forward to learning about the results!

Christi Mileski is a design studies major/wildlife science minor at NCSU and is working as a summer lab assistant for the Dunn and Frank Labs. Christi is passionate about wildlife conservation and environmental awareness. In her spare time she enjoys trail walking, tree climbing, fiction novels, travelling, and art projects. This fall she’s working as an intern in the NRC Biodiversity Lab.