*Today’s blog Q & A was written by NCSU undergraduate, Christi Mileski. Christi has split her time this summer between Your Wild Life program and Steve Frank’s Eco-IPM Lab in the Department of Entomology. She’ll share more about her recent adventures with the Frank Lab collecting herbivorous insects on the streets of Baltimore in coming weeks. Today, she chats with Roland Kays about the Great Chicken Coop Stakeout*

Dr. Roland Kays is the director of the Biodiversity Lab in the Nature Research Center at the North Carolina Museum of Natural Sciences and an expert on all things mammal. He and colleagues are responsible for an exciting study that captivated eager museum visitors at the NRC Grand opening in downtown Raleigh last April: the theatrically named The Great Chicken Coop Stakeout. The Stakeout aims to uncover the various North American carnivores attracted to backyard chicken coops, an increasingly common yard feature in the Triangle area.

This project recruited many volunteer chicken-keepers to set camera traps near their chicken houses in an attempt to catch predators in the act of snooping around the unsuspecting chickens.

During a recent visit to the NRC Biodiversity Lab, I was intrigued by the early coop cam photos that had been printed and displayed on the lab windows.  And so I asked Dr. Kays a few questions about the project: 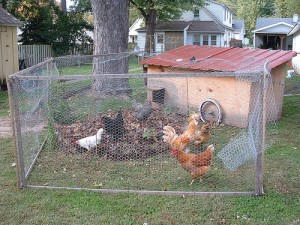 Where did you get the inspiration for The Great Chicken Coop Stakeout?

I recently finished a study of animals living in suburban woodlands and wondered which animals might actually enter back yards and which of these animals would be interested in chicken coops.

The problem of predators stealing chickens is not new, yet I read on your website that this type of study has never been done before. Why do you think this is the case?

Camera traps aren’t exactly new technology, however they are getting better and are becoming a more popular technological source for scientists to use.

My primary interest with this study is to see how far into suburban areas different carnivore species have penetrated.  Over the last few decades many species have adapted to urban environments and I want to get a snapshot of where they are today, especially larger species like bobcat and coyote. 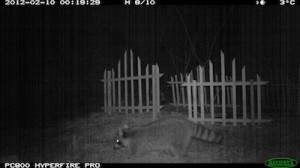 A raccoon caught on camera lurking in a Raleigh backyard.

How do you think chicken-keepers will react to the results of your study? Will you make recommendations about how they can better protect their flock from predators?

We haven’t finalized our results, but based on a preliminary look through the photos it seems that most backyard chicken coop owners have little to worry about, other than raccoons.  Raccoons were the only wild animal we found really interested in the coops themselves; most other species were just passing by.

I would anticipate that urbanization in general isn’t such a good thing for most animals given the associated declines in natural habitat and increased interactions with people (e.g., hunting, car collisions). Are urban carnivores (like those checking out chicken coops) doomed or do you think they can adapt and thrive in the urban environment?

I think the adaptation of many species to urban environments is encouragement that some species can thrive in our presence. Yet, it takes time for them to adjust and evolve.  It helps that carnivores have been under less pressure from trappers in recent years, especially in urban areas.

You can read more about the Great Chicken Coop Stakeout on the project website and in this recent article covering the project in the Raleigh News & Observer.

And hey, head downtown and drop by the Biodiversity Lab (on the 2nd floor) – they’re always showing off new coop cam photos!

Christi Mileski is a design studies major/wildlife science minor at NCSU and is working as a summer lab assistant for the Dunn and Frank Labs. Christi is passionate about wildlife conservation and environmental awareness. In her spare time she enjoys trail walking, tree climbing, fiction novels, travelling, and art projects. She looks forward to working as an intern in the NRC Biodiversity Lab this coming fall.