I will try to keep this simple. Out among the leaves and rotten logs of North America lives the Asian needle ant (Pachycondyla chinensis). This ant is native to Japan 1. It was first recorded in the U.S. in North Carolina, my state, where it was largely ignored and described as being innocuous. That was a mistake; it was not. 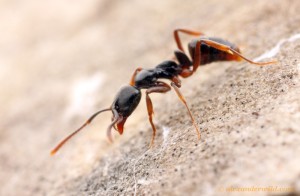 Work by Benoit Guenard, Eleanor Rice and others has revealed this ant to now be among the most common ant species in large parts of North Carolina and South Carolina. Where it is abundant, it takes over. Native ants become rare. Seed dispersal of some native plants slows. It is a bad, bad ant — though because it is alive it is, like all species, also fascinating and mysterious. If you put out good for it, delicacies like dead roaches, it does not lay trail pheromones to them. Instead the worker who finds the food runs back to her nest, picks up a sister and drags that sister to the food, “HERE it is, thump.”

All of this is known if not well appreciated. Also known is that this ant stings. It stings hard enough to make brave graduate students wince and less brave graduate students switch to working on fruit flies. Many folks appear to be allergic to these stings—the risk of anaphylactic shock from stings by the Asian needle ant is much higher than from stings of, say, honeybees. Fortunately, the Asian needle ant is mostly peaceful. On its six, long legs it walks softly but carries a big sting.

Now the news. As part of the School of Ants project in which citizens–be they ant professionals, engineers, teachers, or kids—thousands of people have now sampled the ants in their yards (schoolofants.org). Many of the ants these folks have found are common but poorly known native species. Others are rarer native species2. Others still are invasive species, including the Asian needle ant. In the first year of sampling, all of the records we saw for the Asian needle ant were from places we already knew it to occur (mostly North Carolina); then came the shipments.

When people send us ants they arrive in a box in the Department of Biology at North Carolina State University or a similar box at the University of Florida (where the director of the project, Andrea Lucky, now works). There the ants wait until one of our diligent ant sorters takes them up to the lab. In the lab, the ants are glued onto tiny triangles of paper that are put onto pins. Labels are then attached to the pins indicating where the ants were found. Finally, the ants are identified by experts. We pay systematists—those great and under-appreciated namers and classifiers of life—to identify the specimens, because it is hard, skillful work and we want the identifications to be right.

The whole process takes a great deal of time, patience and comfort with delayed gratification like the kind that came in an email last week. It was an email from one our ant identification experts, Alex Wild, indicating that the Asian needle ant had been found by amateur scientists in Wisconsin. Separate emails from experts for other regions revealed it had also been found in Washington and Manhattan. Without being noticed, the Asian needle ant appears to have arrived in many disparate regions of North America. The Asian needle ant might be taking over America. AAAAAH! Now, back to the delayed gratification. 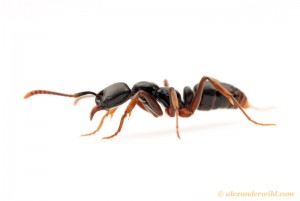 What we don’t know is whether the new records represent individual colonies that have established temporarily in these regions but will be killed by winter or if they represent larger populations that have spread unnoticed, eating everything in their paths. This is where we need to stage something that has never been done before, a citizen-based rapid assessment of backyard life. We need people in these states to go out and sample more for ants. We need to know whether this species is in your backyard. If you want to help, please follow the School of Ants protocol to collect ants (just take care when you do, as remember Asian needle ants can sting!) Send us your specimens and when they arrive in our box, we will prioritize getting through specimens from the regions where we know the Asian needle ant has been found (see here for identifying these ants yourself).

If the Asian needle ant is common in parts of New York, Wisconsin or Washington, there might still be time to control it. So please look. And if you don’t find this ant, you can just count your myrmecological blessings and watch instead the less problematic ants around you as they go about their business. They are no less mysterious. In fact, of the twenty most common ants we are finding in backyards, most have not been studied by scientists in decades. Many of these species, species like the odorous house ant (Tapinoma sessile) are small enough to squeeze under your door (and I would hope into your heart, but perhaps that is too cheesy). But even as they walk into your sink or through your drawers they remain more unknown than known. No one can tell you, for example, why the odorous house ant smells precisely the way it does (in part it may be an alarm smell, a teeny tiny aromatic expletive) or what use the compounds that produce its odor (a hint of lemon and tangerine, at least to my nose) might have. These ants might be releasing chemicals that could cure a cancer for all anyone knows, or even just bad breath. And so we get back to being patient, waiting both for the samples to arrive in a cardboard box in our mailroom and for the slow pace of science as we struggle—hopefully with your help— to understand the millions of species wriggling alongside us in the modern world.

1-When Benoit Guenard went to Japan to search for and study this ant he found it. He also found a new species of ant in Japan, Pachycondyla nakasujii, named for the eminent Japanese professor Nakasuji who, it is said, is, like this ant, a bit shorter than average.

2-The most recent of these discoveries involved the ant Aphaenogaster miamiana. This ant has never been studied in great detail; however, it has been reported from all around Florida and adjacent states. It had never been reported from North Carolina. In fact, a model of where it might be expected to occur did not predict it should occur in North Carolina. Nonetheless, two School of Ants participants have now found this ant living in North Carolina where its habits are entirely unknown.