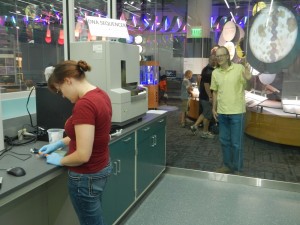 Megan working at the bench while a curious NRC visitor looks on (Photo credit: Julie Urban)

On some days, I feel like I am under more pressure than Tom Cruise in Mission Impossible. I’m an intern in the Genomics & Microbiology Laboratory at the Nature Research Center at the North Carolina Museum of Natural Sciences. I work in a shiny new lab, surrounded by high-tech machines used for DNA analyses, the likes of which I’ve only seen previously on TV. What’s more, I have a constant audience watching me through the glass walls that surround our lab.

But, it’s in this fishbowl lab where I have the opportunity of a lifetime. I work with armpits.

More specifically, I use DNA sequencing to discover what microbe species (and how many different kinds) live in armpits.

[Good news, you don’t really stink — your bacteria do, thank the lord, because based on the odor coming from my personal plates, I’d never go out in the heat again!] This project is a collaboration between Dr. Julie Horvath and Dr. Julie Urban (the director and assistant director of the Genomics & Micro Lab and my internship mentors) and the Dunn Lab at NC State (those folks behind the Belly Button Biodiversity project).

In the lab, we sample armpit bacteria, and grow it out on “bacteria-licious” agar plates.  We then make copies of the 16S ribosomal RNA gene – a special region of DNA in bacteria that provides a species-specific “fingerprint.” That is, each species of bacteria has a different and unique 16S sequence. Sounds simple, right?  Well, here is another reason why I feel like Cruise…the lab is really spacious, and I’m always nervous that I will drop my entire plate of samples on the floor while walking to the thermocycler (the machine that copies DNA of my “pit-teria”). In case you were wondering, it’s like a fancy oven and fridge in one; it cooks my “ingredients” then chills them so I don’t lose any of my samples. Then I test to see if I really did make many copies of 16S by running my samples through the coolest glow-in-the-dark gels I have ever seen (I feel like I belong on CSI).  Then comes another round of copying. Only then, if everything worked, we can sequence the DNA. 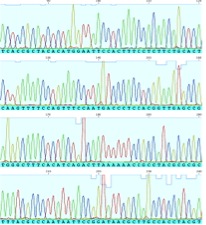 Into the DNA sequencer goes a concentrated soup of unknown 16S sequences and out comes a colorful, ordered string of letters, the DNA nucleotide bases (A’s, C’s, G’s, and T’s) that make up the 16S gene. Seeing the sequences of the 16S gene from MY armpit bacteria was so exciting! Never in my life did I think I would ever be this close to the actual sequences, the code to life. I watched a program about the Human Genome Project in high school, but I never thought that I would be doing procedures so similar to those that I saw the scientists doing on TV.

After my initial excitement and admiration for these sequences, I set to the task of making sense of the 300 bases comprising the 16S gene in my armpit bacteria.  By comparing my sequences to 16S sequence from other known bacteria, I am able to identify the species that grow on me. Generally, if the sequences I recover differ by 3-5% of their base pairs, then they most likely belong to different species. Of the 8 sequences I have mapped so far, it appears there are possibly six different species.

You many be thinking, “Only six kinds of bacteria?” True, my species numbers are low compared to what other researchers have reported for skin microbes living on and in other body parts (including the human hand and belly button). According to this research, we might expect 100-300 different species of bacteria living in the armpit. So why the low numbers? We’re using a different technique than those researchers this first go round. I’ve just been sequencing the bacteria I’ve picked from individual colonies growing on agar plates. The previous studies I mentioned used a technique called pyrosequencing where 16S genes of ALL bacteria collected in a sample are sequenced, not just the ones grown out on plates. But never fear, we have big plans for pyrosequencing soon.

Ultimately we want to learn more about the bacteria living in the armpits of each one of us. We are curious how the diversity of armpit bacteria might change according to our daily habits (as in, applying deodorants or antiperspirants… or not) or where we live. And admittedly with all these hours of hard work in the lab, I am hoping to find a new species that I can name after myself. Generally I am quite humble, but the wide-eyed stares from the kids on the other side of the glass make me feel like a genius.

My experience in the lab is not my own. I share it with all the visitors of the museum. They see me work everyday in the lab. They see me jump for joy when my gels run beautifully, and they see me hang my head when things don’t go so well. Little does this curious audience on the other side of the glass know I work with smelly, gross armpit bacteria. In a few weeks, after we complete more of our analyses, I look forward to coming out to the other side of the glass to tell them all about it. 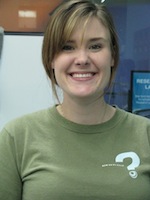 Megan Ehlers is a senior at NC State studying biological sciences. She is working on the new armpit microbial biodiversity project at the Nature Research Center in downtown Raleigh, and will continue to work on the project until the end of the academic year in spring 2013. She calls Murphy, NC, home and would like to attend medical school following college.