*Today’s post is written by Jeremy Boeing, a rising sophomore at Lake Forest College, who has spent his summer sampling ants along Metra lines in Chicago. You might recognize him as the star of a video posted today in the Chicago Tribune feature on School of Ants.*

What exactly does it mean to be a field biologist? Perhaps the biggest difference between our work and the other biology projects happening here at Lake Forest College is that our data collection happens exclusively outdoors. In order to collect our project samples, we must physically travel to and collect ants from our designated study sites. We have used various modes of transportation to reach our sites including hiking, biking, train rides, and car rides.  At my sites the reactions of the people to what I am doing are as fun as the sampling itself. For this post, I’d like to take you through an average day in my shoes: 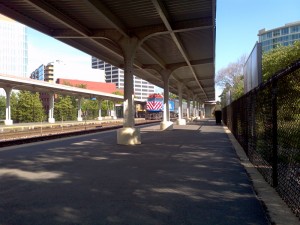 Who doesn’t love trains? I get to see them zoom by several times a day. How many other scientists can say they work with ants AND trains?

The goal of my project is twofold. One, help out the School of Ants project by sampling all of the Metra train stops in Chicago in order to get a feeling for the amount of biodiversity within the city. And two, look at the ways that ants may potentially use the Metra lines as a means of moving throughout the city. The edge of the train tracks remains grass and trees, like it has been for many years. These corridors may keep distant parts of the city connected for animals as well as people. Think of it as a tiny road system for insects! To answer to our research question and help with the School of Ants, I go out with Gabe, another student at Lake Forest College, and sample every other day.

Each field day starts off in the same way. Gabe and I meet up at the lab early in the morning to decide precisely where we will be going to sample for the day. After deciding the number of stops we want to do and their locations, we prep our vials with cookie, because what ant doesn’t love cookies? After just a few minutes of taking down addresses and making sure we have our proper supplies, we head off to the train, or my car, with our bikes to start our day of traveling.

My task is to sample around the train depots and the station itself. I try to locate and capture as many different species of ants as I can within a few meters of the station. Normally I will do a quick walk-through before laying down any equipment to see if the ants are active and moving around. Different species of ants may be found near trees, under rocks, in sidewalk cracks, on tree branches, and, of course, in the grass. After I locate an ant, I capture them with an aspirator, along with the cookie baits.

Our essential collecting equipment. Left: A sampling vial baited with cookie crumbs. This one has been deployed for an hour and has attracted a lot of ants. Right: The aspirator. I suck in on the plastic tube. The metal tube is used to pick up the ant by suction. The plastic tube has a filter so I don’t inhale the ant or too much dirt.

The aspirator is essentially a human powered vacuum which I use to suck ants through a tube into a collection vial. This method is much faster than randomly stabbing at the ground with tweezers attempting to nab the ant as it scurries around haphazardly. After I have captured one of the tiny insects, I put them in 95% ethanol to preserve them until I can identify them back in the lab. After an hour of sampling, it is time to head back to the cookie baits to see what I have caught. I take the baits and, if there are any ants captured in the tube, empty the tube contents into a plastic bag, cookie and all. I then label the bag so we know where and when the sample came from to keep everything nice and orderly. I then meet up with Gabe who samples residential areas away from the station, and we go to the next stop. 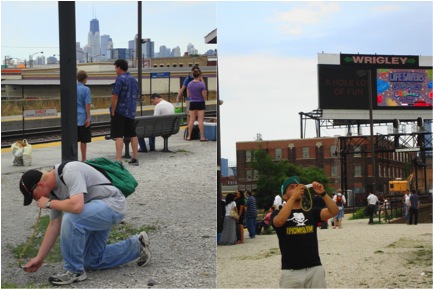 Collecting ants along the Metra lines of Chicago. I’m on the left and my research partner Gabe is on the right. Most people seem pretty oblivious to what we are doing.

Once sampling is done for the day we head on back to the cozy lab and we put our samples in the freezer to further preserve the specimens. We take down some notes about the weather, date, and location of our cookie baits to send to North Carolina for the School of Ants project. We also keep our own samples at the lab so that we can identify and use the ants for our own data analysis to answer some questions about ant diversity in the city.

During many of the times I have been out sampling, I have encountered interesting predicaments.  To date, I have had conversations with Highland Park Police, Vernon Hills Police, and Metra Security. Part of field biology is being out in the open where other people may witness, in full view, what you are doing. At first, it was really awkward for me. People would stare at me as I scurried around sucking up ants into a vial and tweezing at the ground like a crazy person.  Eventually you get used to it though. In fact, I kind of like it when people take an interest in what I’m doing as it gives me a chance to teach them about ants and potentially help get them involved in the School of Ants project. However, sometimes people would rather let the police deal with things than approach you… 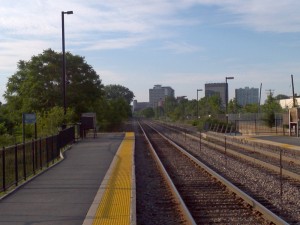 Here’s an ideal sampling site. I’ll collect ants just off the boarding platform on the concrete and tar, and then will set more cookie baited vials off in the distance in the trees and grass beyond the tracks.

It was a hot sunny day in Highland Park when I arrived at the station. I walked up there wearing my green-sleeved jersey shirt and my Cubs hat. I remember looking up at the sky only to be blinded by the sun. “Yep, we’ll mark that one down as sunny and clear,” I breathed to myself.  I found a nice patch of bushes to put a couple of cookie baits in and put some on the boarding platform out of the way of train goers. I began my visual survey with my tweezers in one hand and an aspirator in the other. About 15 minutes into my collection, I noticed I had a shadow. A small boy no older than 7 years old had begun following me as I crouched under bushes, examined trees, and collected ants. I gave him a glance and a brief smile which he quickly returned to me just before I went back to suck up an ant. As soon as I had captured the insect, the boy poked my back and shrugging his shoulders asked me what I was doing. I explained to him that I was looking for different kinds of ants in the area.  “Oh,” he said, “You mean like the red and the black ones?”

“That’s exactly right,” I replied. He quickly told me that he knew why some ants were red while others were black.

“You see,” he began, “there are two different kinds of ants because the black ones are nice. You know, they just want to crawl on you and stuff. But the red ones, those are the mean ants because if they get on you then they’ll bite.”

“I see.  You really know your ants, huh?”  I waited a second for a response that would never come. The boy, like most kids I know, lost his interest in me and ran off to go play the Gameboy that his mother had pulled out of her purse. A few minutes later the two boarded a train and were on their way. My day however, was far from over.

As the sampling time almost completely expired I watched a police cruiser pull up to the rear of the station and two gentlemen exited the vehicle. They quickly approached me and after a few awkward moments of silence one of them gestured to me.

“Hi,” I said. Another blanket of silence fell.

“Whatcha…uh…whatcha doin’ there?” It was an awkward statement to say the least. It was almost as if he wasn’t sure whether or not he should treat me as an adult or as a child.

As I began explaining my situation and the project to the officer his facial expression changed a good three times in thirty seconds. First, amazement, followed by curiosity, and finally, relief. I showed him one of the alcohol vials that had several specimens I had collected over the past 45 minutes. He held them up to the sky as his partner leaned over to get a good look. They looked long and hard at that vial as if by looking together they would make some sort of magic happen. After rotating the vial several times over he handed the vial back to me, “Well, the ticket agent in the building called us and said that she had a suspicious person in the vicinity.  This is honestly the first time I’ve heard of or seen someone collecting ants, but you know how it is.  The railroad tracks attract some strange people.”

After that statement I cocked my head. “Oh no no no, I’m not saying YOU’RE one of the strange people, just that, ya know, strange people come around here.  I’m still gonna have to take down your information though because you were reported.”

“Well,” I replied, “I suppose it’s a day of firsts, your first time seeing someone collecting ants and my first time having to give my information to the authorities.”

After all the fun of giving my name, address, phone number, and all that other good stuff, the officer told me that he would talk to the ticket agent.  He came back a few moments later, “Welp, you’re all good. Take it easy. Good luck with your collections. I’m gonna share this info with the rest of the department so you should be all good from now on.” And with that, he walked away.

Sometimes that’s just how things go.  Field biology is a lot of fun and you just never know what you’re going to get.  Until next time, I’ll be out working on the railroad! 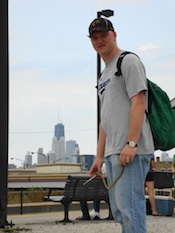 Jeremy Boeing is a rising sophomore at Lake Forest College and is interested in all sorts of science, especially field biology. As members of the Richter Scholar program at Lake Forest, Jeremy and fellow student Gabe Trujillo are working with Professor Sean Menke this summer to investigate ants that live near the Metra trains in Chicago.