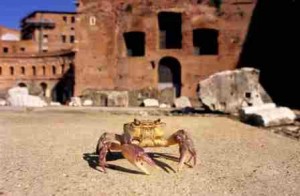 On Scientific American’s Guest Blog today, Rob shares a fascinating tale about crabs recently discovered in a portion of Rome’s underground river – They look and act differently than other Italian river crabs… Has a new ten-legged species evolved beneath Rome?