A guest post from our friendly neighborhood paleontologist, Dr. Lindsay Zanno, on the birds…ahem…dinosaurs that live among us.

Twelve years ago I moved to a small town in New Jersey to catch my breath (no sarcasm intended…). One of my favorite escapes was to sit with pen, paper, and ink handy and scratch out meager drawings of the animals living at the Philadelphia Zoo. Since I was headed to graduate school to study paleontology, observing “wildlife” seemed like a healthy way to whittle away at a long hot summer.

One cool evening as the sun was sinking low and the visitors began their pilgrimage en masse to the main exit, I stood leaning far over the stonewall circling a particularly empty-looking enclosure. Yes, I know, I know. Leaning precariously over a zoo enclosure is never a brilliant idea, and so the following happenstance most certainly served me right. Out of the corner of my eye I saw a flash of “something” speeding along the inner wall some distance beneath my extended self. It looked uncannily like a small raptor dinosaur; in fact, for the briefest of moments (one of the most terrifying of my life) I was entirely sure that it was just that and that I had narrowly escaped being torn to pieces as a result of my confounded primate curiosity. Wild eyed and startled, I jumped back from the wall and almost as quickly ran forward again to see if I could catch another glimpse of whatever glorious animal had just passed beneath me. That was my introduction to the magnificence of the secretary bird (Sagittarius serpentarius), which remains to this day my all-time favorite bird species. 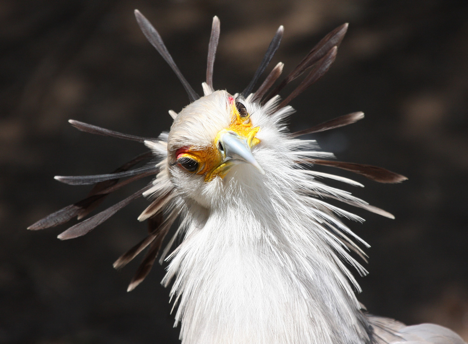 I certainly didn’t know it at the time, but my basic intuition was right on the mark. The speedy, ground predator I had encountered looked a lot like a raptor dinosaur because it, in fact, IS a raptor dinosaur. There, I said it. Birds are DINOSAURS. No, not just descended from dinosaurs, but living, breathing, glorious and oft times terrifying dinosaurs in their own right.

Over the past two decades or so, an incredible diversity of primitive Cretaceous birds and their closest feathered cousins have been unearthed in China. These discoveries have prompted a revolution in our understanding of dinosaur evolution and biology. he most egregious outcome of all this?  The hypothesis that dinosaurs went extinct 65 million years ago—the one kernel of knowledge about dinosaurs that we have clung to since early childhood other than the idea that T–rex and Triceratops are eternally locked in the throws of battle—turns out to be a big fat lie.

On a positive note, the idea that we live alongside dinosaurs is trés cool. Not only didn’t dinosaurs go extinct at the end of the Cretaceous period, they are still kicking butt, at least in terms of species diversity. There are nearly 10,000 bird species known from our modern ecosystems, yet only around 4,500 mammal species. In other words… dinosaurs outnumber us about 2 to 1. So the idea that dinosaurs were an evolutionary flop doesn’t pan out so well these days.

Now I want you to sit back and ponder this. Really let it sink in. You see dinosaurs every day, and probably interact with them a fair bit too. Your Thanksgiving turkey? Yep. Your morning plate of fried eggs? Sure thing. The annoyingly fearless and creepily intelligent gulls that snatch the uneaten Cheetos out of your kids’ hands at the beach? Most definitely. Crazy, huh?

Less than a year after the secretary bird at the Philadelphia zoo ran off with my imagination, I got my first glimpse of one skirting across the African savannah. In three weeks I am headed back to Africa again, and I hope to scout out a whole host of incredible dinosaurs: bizarre hornbills, colorful bee-eaters, goofy flamingoes, and fearsome fish eagles. 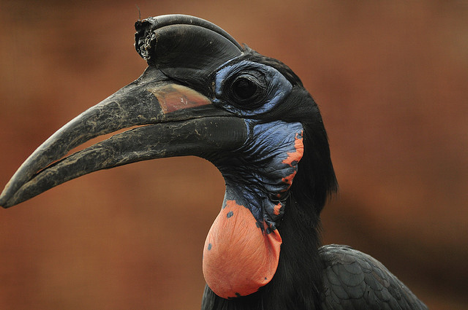 For your own part, you can watch dinosaurs from the relative safety of your backyard. Or head to your local zoo, where you too may have the great and terrifying fortune of encountering the spectacular secretary bird. Long may you live to tell the tale. 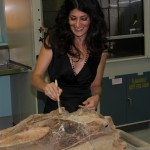 Dr. Lindsay Zanno is the Director of the Paleontology and Geology Research Laboratory at the Nature Research Center, part of the North Carolina Museum of Natural Sciences, and Associate Research Faculty in the Biology Department at North Carolina State University. Her research focuses on the anatomy, evolutionary history, and paleoecology of theropod dinosaurs—a group that includes the iconic megapredator T. rex as well as living birds. She is currently one of the world’s leading experts on a bizarre group of herbivorous theropods dubbed therizinosaurs, some species of which possessed scythe-shaped hand claws more than five feet in length! Follow Lindsay’s upcoming African expedition at http://ncmns.wordpress.com/