[I am wracking my brain here to come up with some witty pun inspired by quotes from the cult-hit movie “Office Space,” and I’m at a loss – Yeaaaaahhhh, there’s gotta be something we can connect to TPS reports here… Well, since I was unable to come up with something in the span of writing this post, I turned to Twitter, and was met with outstanding success – More on this digression at the bottom of the post…] 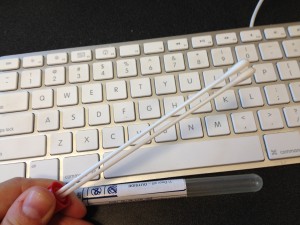 A research team led by Scott Kelley at San Diego State University used a two-pronged approach to investigate the diversity of microbes living on five common surfaces in 90 different offices (30 per city): culturing bacteria and high-throughput gene sequencing. It’s quite literally a two-pronged approach since the researchers used double-tipped sterile swabs to sample the surface of office chairs, phones, computer mice, computer keyboards, and desktops – the same kinds of swabs we are using to sample surfaces in the Wild Life of Our Homes study.

For the office study, one of the swab tips was used to culture and count the number of bacteria growing on plates, a more traditional approach for studying microbes. From the other tip of the swab, researchers extracted, amplified and sequenced regions of the 16S rRNA gene. As you may recall, the 16s rRNA gene is found in all bacteria and codes for a part of the ribosome (the important machinery in every cell responsible for translating the genetic code into proteins). There’s a region within the 16S rRNA gene that is extremely variable among strains of bacteria; in essence, this hypervariable region provides a species-specific DNA “fingerprint.”

What did the research team find?

In counting the bacteria growing on plates, the team found that offices occupied by men generally harbored more bacteria than those occupied by women, that San Francisco offices had much lower bacterial counts than either NYC or Tucson, and that the phone and the desk chair were hot spots in terms of the total number of cultured bacteria found there.

From the bacterial sequencing, researchers found nearly 4000 different strains of bacteria in 500 genera from 20 different divisions. Proteobacteria, Firmicutes and Actinobacteria – groups that include many species commonly associated with human skin and gut (yuk, please wash your hands after you go to the bathroom) – were consistently the most prominent across all samples.

A few things really struck me about this paper:

First, I found it a little curious that the authors frequently used the word “contaminated” when describing bacteria on the office surfaces. Contamination implies to me that the bacteria are harmful. I am sure that there are some strains in the 4000  detected that indeed cause disease (Note, however, that the analyses for this kind of research aren’t sensitive enough to distinguish pathogens from not), but it seems to me quite natural that many of those millions of microbes that occupy your body (please watch Jonathan Eisen’s outstanding TEDMED talk) will rub off and hang out in the places where you live and work. Is this really contamination or just sharing the love?

Second, it should be noted that when the researchers considered the communities of bacteria occupying offices in each city, they found that office surfaces in New York City and San Francisco had microbial communities more similar to each other than either did with offices in Tucson. The authors suggest that Tucson offices were less diverse (had fewer species and were often dominated by one division of bacteria), something that they attribute to climate. Did you catch that? Climate! This is one factor that we too are hypothesizing makes a big difference in the microbes occupying our homes and is exactly why we are aiming to sample 1000 homes from across the country.

Finally, I thought it was very interesting that the researchers were unable to detect meaningful differences in the types of species that occupy the different surfaces in offices. While absolute numbers indicated there were generally more cells on the phone and the chair, species didn’t tend to cluster in one place versus the other.  Results from our pilot study of 40 homes in North Carolina suggests just the opposite – we’ve found real differences in the types of microbes you find on home surfaces (including the kitchen counter, the pillow case, and the inner and outer door frames). Much, much more about this in the days and weeks to come…

So as not to disappoint, here’s the Storify with OUTSTANDING suggestions for Office Space puns (with special HT to Denise Graveline for title-inspiration):