A couple weeks ago, we learned (thanks, Twitter!) that our Belly Button Biodiversity project had inspired another group of biologists and science communicators to explore body bacteria in interesting (and ahem, cheesy) new ways. 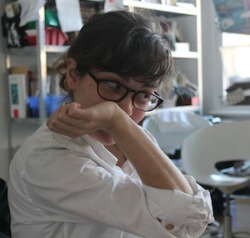 Christina Agapakis, a postdoctoral research fellow in synthetic biology at UCLA, and colleagues recently launched a new website Bacterially.org. They also set up shop at a local bar during SXSW (the annual music, film, and interactive conference and festival held in Austin) to get folks thinking, sampling and talking about their body microbes.

We asked Christina a few questions about Bacterially.org and her SXSW sampling experience:

What is Bacterially.org? Tell us about who you are and what your project is all about.

I’m a synthetic biologist so I’m interested in microbial ecology and symbiosis from more of an engineering perspective: what can organisms do as part of a community that they can’t do alone? I’m fascinated by how the biochemistry of individual bacteria changes when they are part of a community, especially because so much of what we know about microbes comes from bacteria studied in isolation and we still know so little about how microbes work together with other bacteria and with our bodies.

Bacterially.org is really a work in progress, a collaborative project that combines art and science where we explore these issues and collect images and data from the bacteria we’ve collected. We started the website because we wanted to be able to show people what their bacteria looked like and to learn along with us In many ways, we were inspired by what you did with the Belly Button Biodiversity project. We’re hoping to be complementary to your project, to learn from the diversity that you identify and sequence and to explore the chemistry and structure of microbial communities, and to perhaps recast bacterial ecologies as a substrate for design.

Like us, you’re interested in exploring and understanding the microbes living on human skin  – but your project has a unique design and sensory twist. Could you explain?

This is a collaborative project that started with Synthetic Aesthetics, a program that connects artists and scientists to explore the potential of cross-disciplinary collaboration in synthetic biology and the design of living things. My partner in this project is Sissel Tolaas, a smell researcher whose work focuses on how we navigate and understand the world through odors. She does amazing projects that catalog and recreate the smells of cities and the smell of human bodies. When we started working together we wanted to focus on biological odors–how do microbes contribute to the smells we encounter every day? We began to research how our skin microbes make body odors and the interactions between our skin and our bacteria. Which is a good lead in to your next question…

Bacterially.org features a “Cheese” section where you explain that the microbes responsible for making Limburger cheese stinky are VERY similar to the bacteria on our feet! And then you go a place where I imagine few have gone before… you want to MAKE cheese with human microbes. Seriously? You want to make cheese from toe funk? Will people really eat that?

What we were most struck by in our preliminary research (other than the fact that most research on body odors has to do with deodorant production) was that when we tried to google ‘isovaleric acid’ and ‘Propionibacterium‘–the compound and bacterium most responsible for the smell of armpit sweat–all we could find was information about the production of Swiss cheese. Turns out the “cheesy” odor of sweat is due to this microbiological similarity between our skin and cheese. The more we looked the more we found; there are studies on how Limburger cheese bacteria are so close to foot bacteria that you can trick mosquitoes that preferentially bite human feet into landing on Limburger cheese instead.

We also talked with cheese microbiologist Rachel Dutton at Harvard and she told us about artisanal cheese production and aging where the cheeses are washed and brined in such a way so as to keep them as moist and salty as skin, to promote the growth of bacteria that make the really funky cheese flavors. This inspired us to want to make our own cheese using bacteria that we isolate from our own skin, and we made the first batch in the lab during our residency about a year and half ago. We swabbed between toes, under armpits and in mouths and noses and put the bacteria in milk. The metabolism of the bacteria produces acids that curdle the milk (this is how real cheese is made, but with a much more controlled starting population of Lactobacillus!). The cheeses that we made by straining these curds were all really different, with different colors and textures and smells – this has really inspired me as a scientist to think about how mixtures of different bacteria can have different community metabolisms and produce different flavor compounds. The project isn’t necessarily about making cheese that people will eat, but about exploring how microbes work together to create different smells and tastes and to highlight how important bacteria are, not just as part of our bodies but also as part of our food.

You all had a presence at this year’s SXSW – What did you do there? What did festival attendees think about your project?

I was part of a panel about synthetic biology at SXSW with Patrick Boyle, Jason Kelly, and Daisy Ginsberg, and we wanted to be able to do something a little bit more hands-on at the festival. With help from Austin residents and science communicators Lindsay Patterson and Joe Hanson we set up a table at a local bar, where we could talk to people about microbes and collect samples of bacteria that we brought back to the lab to grow on petri dishes and analyze further. We had some fresh cheese that I had made with my foot and armpit bacteria as a demonstration for people to smell. What was most interesting about people’s reactions is how quickly their attitude changed from totally grossed out to really interested and curious about bacteria. We got some really interesting and thoughtful questions from people who maybe at first were very hesitant to smell the cheese or give bacterial “donations.” A lot of Sissel’s work is aimed at increasing our tolerance and acceptance of one another and of odors in general, and we can definitely see that in action when we talk with people about our cheese.

What’s next on the horizon for Bacterially.org?

We’re not sure! We’re still growing the bacteria and collecting the data from Austin right now.

[Update: Christina et al. recently posted pics of bacteria they grew from 71 individuals sampled in Austin!] We’ll probably be making more cheese soon as well, perhaps with mixtures of individual species isolated from the samples we collected in Austin for a little bit of “local flavor.” Bacteria are incredible and their communities are so complex, there are a lot of different directions we could go and we’re really excited to simply explore some of the possibilities.

Thanks, Christina!  In addition to Bacterially.org, be sure to check out Christina’s blog on the Scientific American Blog Network, Oscillator, and follow her on Twitter @thisischristina.