As previously mentioned, we’re going to introduce you to some of the undergraduate students and recent grads who work hard behind-the-scenes to keep Your Wild Life ticking. 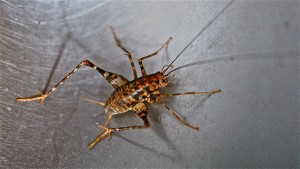 We here at Your Wild Life have been talking a big game lately about camel crickets. We asked you to report your sightings and share photos of the leggy beasts in your basement.  Thanks so much to so many of you that have heeded our call for help!

We’re not experts on Orthoptera* so we called on our entomologist pal Piotr Naskrecki to help us identify the crickets in your photos.

[*Orthoptera refers to the group of insects that includes crickets, grasshoppers, and katydids.] We were surprised to learn that the vast majority of pictures you shared with us starred a camel cricket native to Japan, not North America: Diestrammena asynamora.

As we continue to track the camel cricket, big questions have emerged:  When did those Japanese crickets get here? How did they end up in our basements? What do they eat? Does anything eat them? Are there differences between the crickets that live in your basement versus mine?

We’ll detail our efforts to answer some of these scientific questions (and likely ask you to help us do so) in upcoming posts here on the blog. 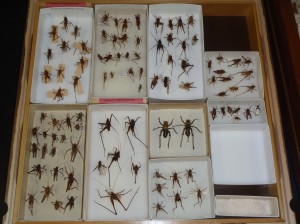 But in the meantime, we realized there’s an important question many of you submitting pictures have asked, but we weren’t able to answer (until now) – How can you tell the difference between native and Japanese camel crickets?

So in the name of science, we took a field trip to the NCSU Insect Museum. With a key to the Rhaphidophoridae (the scientific name for the group we call camel crickets) in hand, we set off to understand the differences between native camel crickets in the genus Ceuthophilus (what we would have expected to find in your homes) and the common Japanese genus Diestrammena.

And so we proceeded to pull out four drawers filled with camel crickets (A way cool aside: the NCSU Insect Museum is in the process of digitizing their ENTIRE collection. You can zoom in and see exactly what we saw in those drawers HERE.)

Rather than walk you entirely through the entire dichotomous key, full of tedious and hard-to-understand insect anatomical terms (thanks to Holly and my Entomology 101 textbook for helping me out when we did do this), I’ll provide the highlights of the differences I observed below – consider this the Cliff Notes version of camel cricket taxonomy.

First you should check out the cricket-in-question’s hind leg, quite notably designed for jumping (which camel crickets are inclined to do right at you!).

Each leg contains five segments – focus your attention on the tibia (#4 in the figure), it’s the part of the leg below the meaty femur (#3), somewhat analogous to the arrangement of bones on your own leg.

Examine the figures below – You’ll see that the native Ceuthophilus species (left) has large, movable spines on its hind tibiae, quite noticeable to the naked eye. The non-native cricket (right) has hind tibiae that are missing those spines; the hind legs in general also appear longer and more slender.

The coloration and body shape are two other useful indicators to distinguish the native and non-native camel crickets. The native Ceuthophilus appears more mottled in color while the Japanese Diestrammena has a distinct banded pattern, particularly on its legs.. Regarding body shape, Ceuthophilus generally appears more solid and thick bodied, meatier, whereas the non-native cricket is comparatively leaner, more slender, and somewhat smaller in size.

Hopefully, you’ll now have a better handle on how to distinguish the native from the Japanese variety of camel crickets. Continue to keep your eyes peeled on the dark and damp corners of your home, particularly now that Spring is upon us and the crickets are becoming more active.  Share your reports and pictures with us so that we can continue to map the distribution of species and start answering the lingering questions we have about the ecology and evolution of the camel crickets that may call your house home. 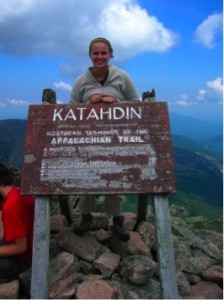 Katlin Mooneyham is a recent graduate from NC State with a degree in Natural Resources. She has been with the Dunn Lab since September 2011 and loves learning about everything that shapes our natural world, especially our insect friends (and foes). She plans on attending Virginia Tech in the fall to pursue a master’s degree in Entomology.