Is a Field Guide for Microbes in Our Future? Q & A with Microbiologist Jonathan Eisen 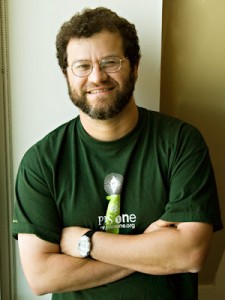 Jonathan Eisen – the evolutionary biologist, microbiologist & genomicist extraordinaire from UC Davis (aka @phylogenomics on Twitter) – is leading the charge to develop a ‘Field Guide for Microbes.’ He recently made an impassioned plea for this Field Guide at the American Association for the Advancement of Science (AAAS) annual meeting in Vancouver.

We were intrigued and thought you would be too. So we asked Jonathan a few questions:

Why do we need a Field Guide to Microbes?

Microbes play fundamental roles in every ecosystem on the planet and just because they are invisible to the naked eye does not mean we can ignore them.  Fortunately new technologies are for the first time allowing detailed characterizations of the microbes found in any particular location.  However, massive amounts of data are not the same thing as “knowledge.”  A field guide to me is a simple and elegant representation of knowledge about diversity of a group of organisms.

A good field guide would include (but not be limited to) information about the kinds of organisms (e.g., major groups as well as a list of individual species), their ranges (where they are found on the planet), their niches (e.g., for birds this could be whether they are found in water, in trees, etc), their phenotypes and behaviors, and how to identify individual kinds.  And by having a simple representation of this information one can engage and include non experts in the discovery, viewing, and study of a group of organisms.  Though the diversity of microbes is so large that a full field guide is impossible right now, the concept of a field guide is a good organizing theme to guide the field of microbial ecology. In addition, if we had anything resembling a field guide it would be incredibly beneficial for engaging non experts and also for understanding when environments change such as in response to human intervention (e.g., the Gulf oil spill) or via natural cycles.

What inspired this idea?

I have long been a naturalist – even as a little kid I carried binoculars and field guides to the birds with me on just about any hike or trip.  My first research was field ecology – on fish, then birds, and then plants and butterflies.  I moved into microbiology because I found it fascinating and have always been interested in microbial evolution and ecology.  And I guess because I have a massive collection of field guides about other organisms (and even inanimate objects), I have been dreaming of a field guide to the microbes for many many, many years.

Typically, when I’ve used a field guide, I match up a picture (and its description) to what I’m observing in nature. But microbes are invisible to the naked eye and often we identify them based on their DNA – So how would a field guide for microbes really work?

Actually, pictures of organisms are just one component of other field guides. For some organisms, the visual appearance is all one needs to try to identify an individual. But for others one needs additional information like niche, location, behavior, sound, etc. So – sure – pictures and physical appearance are wonderful tools but not everything. I think for some microbes pictures will be a major component – and for others DNA analysis will be needed. And this is why the time is ripe for a field guide to the microbes. There are cell phone microscopes available that allow one to visualize many kinds of microbes. And last week a DNA sequencing machine the size of a deck of cards that can plug into a laptop computer (like a thumb drive) was announced. Though it is not clear how well this sequencing machine works I think it is pretty clear that in a few years people will be able to generate large amounts of sequence data in the field. In turn, this would allow one to generate DNA fingerprints of particular samples and helping interpret such fingerprints could be a key component to a field guide to the microbes. I note that not all field guides that exist now work like those for say birds, or trees. For some, one needs to collect samples, sift through them, and do detailed characterizations of what one finds before figuring out what is there. An example of this would be nematodes – or small insects – or larval invertebrates.

The estimates of the number of microbes on the planet are astounding – I’ve read that in every kilogram (2.2 pounds) of soil on Earth, there are 10 trillion microbes! I assume it would be impossible to include information about ALL of them in your Field Guide – How do you pare down the list? Do you start with a particular habitat, group or location?

On the one hand this is an intractable problem. But on the other hand we must start to do this for this is our planet we are talking about. Astronomers are working to classify and characterize all the galaxies – and find all the Earth like planets in the universe. This is also an intractable problem. But even making some headway into it is critically important. The same is true for microbes.

As for how we start, I think we should start with two kinds of focus. First, it would be good to pick one or two niches – such as the surface of pond water – and survey it around the globe. And a second would be to pick one taxonomic group of microbes – for example, cyanobacteria (which is a phylum) or an even narrower group such as one genus of cyanobacteria – and survey those as globally as possible in diverse environments. After all – nobody says “I want to have a field guide to all animals” – even that would be a bit crazy. And given that microbes are much more diverse than all animals – doing a field guide to all microbes at once is certainly loopy. But again, my goal in this is to get people to think about the goal – the field guide – and this will drive how we approach surveys, development of tools, working with the public, etc.

Do you anticipate people making life lists (or checklists) for microbes alá the life lists’ birders collect? Will there be competitive microbe spotters in our near future?

Yes, I do. Seriously, I think that this could happen with the right tools and the right guides.

What role do you anticipate citizen scientists having in the Field Guide for Microbes? How can Your Wild Life participants help?

Many people say a field guide to the microbes is a bit crazy because we cannot see microbes without aid. But citizens are interested in plenty of things we cannot see without help – like toxins and radiation and galaxies and water quality. Given that microbes are critical for the function of many parts of the planet people care about (e.g., agriculture, biodiversity, human health) I believe that with the right tools and the right guidance, “citizens” could participate in many ways. Right now one of the most critical would be to aid in the collection of samples. If we had a citizen army we could do a targeted survey of hundreds of thousands of sites – akin to the home weather stations or citizen birders. And if we figure out ways to engage people in the science itself – the design of projects and in the visualization and analysis of the data – I think we could have a revolution in the science. So an obvious place to start – and where Your Wild Life participants could help – would be in sampling the world around them. Perhaps in the future everyone could collect samples from their bird feeders (something suggested at our Citizen Microbiology workshop you attended) or maybe collect pond water samples – or rain water?

Thanks, Jonathan! You can see (and listen) to Jonathan’s whole talk about the Field Guide for Microbes at the AAAS meeting here.